Last weekend we made our annual trip to a Christmas tree farm in the country to chop down our own tree. Last year, Miles was so small and still in a baby carrier, but this year he was running around like a little monster. I know that everyone who’s ever had a kid says this, but it really is amazing how fast they grow up.

I love this age so much. Miles is talking but you can’t always understand him and everything he says is just so freaking cute. I could watch him run around all day with those short little legs and that goofy toddler wobble. He had a lot of fun following Dad around looking for the best tree. 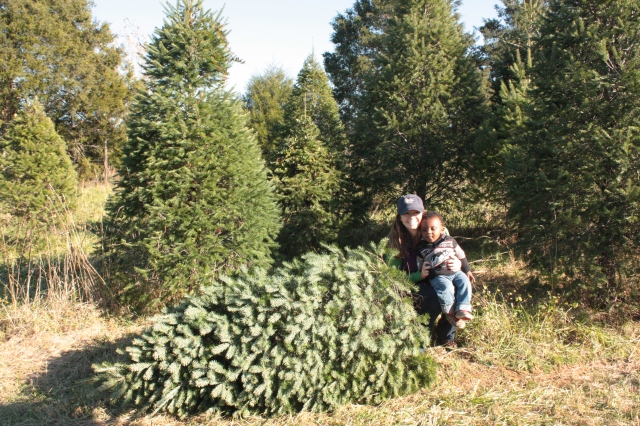 When we finally found it and cut it down, he was a little confused as to why we would do such a thing. He was stoic as he pondered the meaning of it all (or maybe he just thought the stump was cool).

However, he quickly warmed to the idea that we were taking the tree with us.

We had a lot of fun, but I noticed that Miles was the only black person on the entire farm. I had never thought of cutting down your own Christmas tree as a “stuff white people like” thing but maybe it is? (It also may have just been the day or time that we were there; I really don’t know. Also, that website is hilarious.)

Either way, it made me a little sad to think that he might feel like the odd man out in places like this when he’s older. The staff fawned over him, made sure he got a candy cane, and everyone was extra-special nice to us. But, in addition to having a really fun time, the experience also reinforced how important it is for us to build a diverse community and regularly expose Miles to Black culture, too–because the reality is that Miles is being raised by a white family that tends to do stuff that other white people do.

My hope is that we can strike a balance and instill confidence in him so that he will feel comfortable with people of all races and in any situation–and that he will be empowered to do whatever stuff it is that he likes, no matter the social or racial construct.