Some people might think it’s a little odd to have a baby shower when you have no idea when you’ll be having a baby. But, that didn’t stop me from celebrating the eventual arrival of Charlie yesterday. A friend of mine threw a baby shower brunch for me at her farmhouse and it was such a great time.

As I drove the winding country road out to the farm, I had time to reflect on our journey up to this point. I was on the way to a baby shower–and it wasn’t for one of my friends or family. It was for me. Even though we don’t have a due date yet, we know our baby is coming at some point (hopefully in the near future) and yesterday made it all feel very real.  This is happening. I don’t know when. But it’s happening. 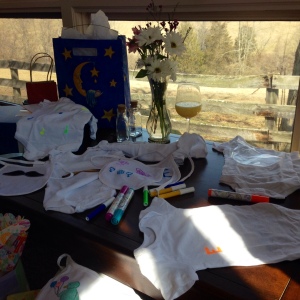 It was a beautiful warm day (even though we’re set to get 8-12 inches of snow today!) and sunlight was streaking through the windows of the farmhouse. It was super casual (just how I like things) — everyone brought something breakfasty to eat and we had mimosas. Even though I’ve only known most of these girls for about a year (we’re pretty new to town still), they were so sweet and supportive and really wanted me to know that Jamie and I have a local community ready to rally around Charlie.

I got some great gifts off the registry, a beautiful hand-crocheted blanket, and the girls decorated onesies and bibs for Charlie. They also did something really special that I haven’t seen at other baby showers: everyone brought a tiny little object meant for Charlie’s nursery that had some meaning to them and that they hoped would remind us of their support. Then they collected the little momentos in a little glass jar for us to keep on the bookshelf in the nursery. 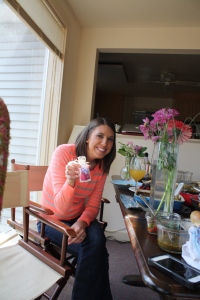 One of the girls brought a little monster made of colorful fuzzy pipe cleaners meant to remind me to never forget to be silly and goofy (won’t be a problem–I look forward to that more than anything!), and that even though there are challenges to parenting and people like to scare you into thinking you’ll never sleep again, that being a mom is so very fun. One of the girls collects fortunes from fortune cookies and put a very sweet one in the jar. There’s a seashell in there to remind us to enjoy the simple things in life, a peso to wish Charlie many happy travels, a sticker with my friend’s baby’s face on it that says, “Frannie loves you!”. There’s a momento from one of their weddings, a dried flower, and a little butterfly that my mom sent to remind us of the monarch release we had as part of our wedding day (and that my mom also did on her wedding day). It was really sweet. 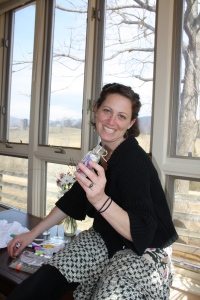 I had been hoping that we would be matched by the time the shower came around. I know a lot of people who are adopting prefer not to have a baby shower before they are matched or before the baby is home or sometimes not until after the adoption is finalized. I get that–having a nursery all set for months and months might be hard for some people, especially if a match fails and it takes longer than expected. It kinda feels like you are putting the cart before the horse. But I want Jamie and I to be ready–calm, cool, and collected–when we get the call. If it’s a fast match, having to scramble and think about things like a diaper pail and a wipes caddy does not sound appealing to me and I know Jamie wouldn’t want to be rushing around. If that happens, I’d rather focus on the baby, the birthmother, and our emotional preparedness than on all the stuff we need to buy. 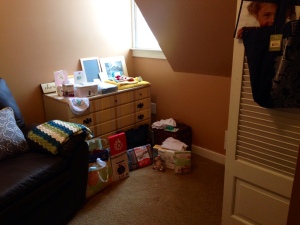 Preparing the nursery is also easing me into the whole thing and keeping me busy. I’ve heard some hopeful adoptive parents say it’s painful to look at an empty nursery, but the opposite has been true for me. I love walking by it every day and looking in. It gives me a warm and comforting feeling to see stuff start to accumulate and it look more and more like a baby’s room (even though I have a lot of work still to do). 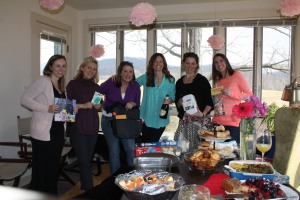 It feels like a natural progression, one that is slowly taking us to the day when we will finally meet our baby. Celebrating yesterday didn’t feel premature as I worried it might. It felt like perfect timing and I felt so lucky to be surrounded by strong, caring women–both in person and in spirit. I forgot to get a photo of everyone before people started leaving but here’s a pic of a few of the girls. That’s me holding a bottle of champagne–there are perks to not being pregnant at your baby shower!