We arrived at the hospital in Texarkana around 4:30 a.m. Sunday morning after driving straight through from Charlottesville. We should have been exhausted, seeing as how we hadn’t really slept in three days. But tired was the last thing we were feeling as we walked into the hospital. It was still dark out and there were no staff at the reception desk. We found the sign for the maternity ward and followed it. My heart felt like it was going to burst out of my chest. We were about to meet our little boy!

Thankfully, the maternity nurse was expecting us and let us in without issue. We went straight to our birthmother’s room, knocked and heard a soft, gentle, “come in.” We opened the door to see her holding Miles, clearly happy and relieved that we were there. “Thank you for coming,” she said. I knew from texting her that she was nervous that we weren’t going to show up. I told her there was no chance of that. None whatsoever. I’m not sure she believed me until she saw our faces, though. She smiled and handed us our son. 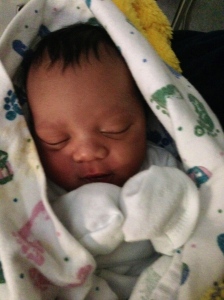 He was absolutely perfect. He was a million and one wishes and dreams come true. The intense emotion I immediately felt for this beautiful little boy was overwhelming. He was not of our blood. He was not of our race. But there was absolutely no doubt that he belonged with us. He was one of us. It felt that way from the very first second we saw him. He was our son; we were his mom and dad. Just like that, we were family.

Our birthmother was clearly relieved and told us there was a room adjoining hers where we could take Miles and bond with him. She was exhausted and ready to get some sleep. She said now that we were there she could finally try to relax. She thanked us again. We told her to get some sleep and that it was us who should be thanking her.

We took Miles into the room next door and just stared at him–and then each other. The last 48 hours had been such a whirlwind and now, in the blink of an eye, we were in a hospital in a town in Texas we’d never heard of, with our son. It felt like the craziest, most amazing and spectacularly perfect thing that has ever happened. 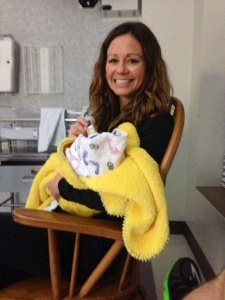 The nurse soon came in and brought us a bottle. She congratulated us, told us that Miles was perfectly healthy and that it was time to feed him. She showed us the bassinet and where the diapers were and asked us if we had any questions. We were too busy smiling to ask any, so she left us alone. That first time feeding Miles… I’m surprised I could contain myself. It was as if everything–everything–was right in the world. “Happy” doesn’t do what I was feeling justice.

We stayed with Miles all that day, and for the next three days until he was able to be discharged. We got to know his birthmother, meet her mother, her sisters, and a few of her closest friends. They were all such wonderful, lovely people and they all love Miles so much. It was not an easy thing for them to do, to choose another family to raise Miles, but they were resolute that it was the best decision for him. I took photos of each of them holding Miles and will use those to make him a memory book so he will know how much love surrounded him from the moment he was born.

His birthmother and I were able to have many heart-to-heart talks in the hospital and I’m so thankful for that time. It was quite amazing, really, looking back. It was just us there — no caseworkers, no adoption personnel at all. We had no idea what we were doing. It was such a strange thing: meeting the birthmother of your child–someone you are so incredibly grateful for and vice versa–but who is going through the biggest heartbreak of her life as you are celebrating your greatest joy. I continuously struggled to strike the right balance between expressing my excitement with showing my respect and empathy for what she going through. I couldn’t imagine having the strength to do what she did. She exemplifies what being a mother is all about: putting your child’s needs before your own. We forged a real connection, and I am so glad I will be able to tell Miles what a wonderful, loving, special person his birthmother is. And that we will always consider her part of our family. 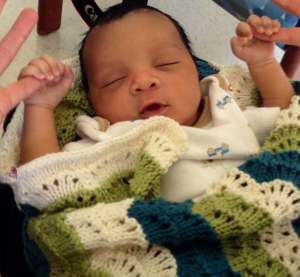 I hated leaving the hospital, but the nurses told us to sleep at the hotel. “You’re going to want to stock up on sleep while you can,” they said. So we did and Miles went to the nursery. It was so funny: we didn’t know about Miles 72 hours prior, but now we no longer wanted to be away from him. It was hard to leave him there and go back to the hotel without him. It was like leaving a piece of ourselves behind. It was hard to sleep, too, wondering if this was really happening and whether or not anything was going to go wrong. Surreal times, for sure.

Here are some more photos of Miles on that incredibly special day… the day my heart was permanently annexed from my body.

12 thoughts on “Our Adoption Story IV: The Hospital”