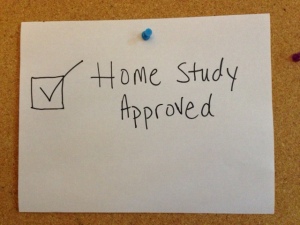 When I first heard the words, “adoptive home study” I got nervous. It was a gut reaction, like automatically pumping the brakes when you see a cop car. “Home study” just sounded so intrusive, like they were going to put our lives under a microscope and search for any tiny reason we were unfit to parent. Before we got too excited about adoption, I wanted to make sure it was a possibility. For some reason, I thought getting approved to adopt was a lengthy, drawn-out ordeal with the main goal of finding reasons for disqualification. I couldn’t have been more wrong.

I’m not going to lie – the long list of to-dos was intimidating. We had to get fingerprinted for the FBI, submit to a thorough background and child abuse registry check in all the states we had lived in over the past five years (which for us was a lot) as well as complete an extensive online course on adoption practices, risks and issues. We had to have physicals and TB screenings, and collect copies of driving records, our marriage record, and the last three years of tax filings. We also had to write thorough autobiographical statements and collect three references from friends. Then we had to meet with a social worker three times, one of which was at our home.

I worried about things that now seem silly. Will the social worker not like us and decide we wouldn’t be good parents? Have we not been married long enough? Will our frequent moves over the last few years make us look unstable? Do we make enough money? Will it count against us that we are new to town and still renting? What if we just aren’t qualified to be parents?

Our social worker was one of the friendliest people I’ve ever met and it was an absolute joy to work with him, a far cry from the vision I had in my head. I cleaned for hours before the home visit but he barely looked at the house, other than to check off boxes to signify there was a bedroom for the child, A/C and heat capabilities, a functional bathroom and a working kitchen. He didn’t open up cupboards or peek into medicine cabinets. He didn’t run a white-gloved finger over the TV to check for dust (although if he had he would not have found any!). He just made sure we had a home that would meet the bare minimum requirements for raising a child, and that we were responsible, loving people.

When we had collected all of our paperwork, filled in the necessary forms, gotten our background checks back (all clear, Mom!) and completed our adoption course, we received our approval package in the mail. In the letter, our social worker noted that our personalities would make us a great parenting team and that we were fit to parent a child of any gender or race. It didn’t matter that we were renting a house, new to town, and had only been married for a year. We were officially licensed to adopt in the state of Virginia, and one step closer to believing it would actually happen.

4 thoughts on “The dreaded home study: not so dreadful”