So happy to say we are finally home with our son, Miles! He will always be a little bit Charlie, too, but as we were in the car, speeding past Nashville, Tennessee, on the way to Texas–trying desperately to get there before he was born–it became clear that Miles was the perfect name. It has been such a journey to get to him, and when he finally found us we drove many, many miles to bring him home. It fits him perfectly. I’m wearing him in an Ergo carrier as I write this, enjoying his sweet little breath against my skin. Motherhood is all I thought it would be, and more. I am in heaven. 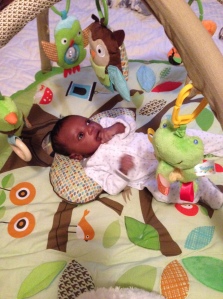 Our adoption story is a long one, so I’ll have to break it up into a few posts. And I’ll start at the beginning… Thursday afternoon three and a half weeks ago on April 3, 2014… I was at home on a conference call for work when I got a call on the other line from a strange number in Texas. I couldn’t answer it and figured it was probably just a wrong number or a marketing call so I didn’t think twice. But they left a voicemail which was odd, so I checked it immediately after my meeting. And I almost fell out of my chair. A caseworker from AdoptHelp left a message that I could not believe. “Hi Allie and Jamie, I’m excited to tell you that you have been chosen by a birthmother in Texas. Her due date is… um, tomorrow, actually. Please call me back.”

I have tried to describe to people what I felt at that moment but have so far been unable. Words just don’t do it justice. This voicemail was everything we had been waiting and hoping for–a dream that seemed out of reach finally coming true. I had started to think that this was never going to happen–that this call was never going to come. I started crying and shaking with excitement. Jamie, by some stroke of luck, had come home early that day, which he NEVER does, and was on his own conference call in the other room when I got the voicemail. I knew I couldn’t interrupt him but I just wanted to bust down the door and scream, “We got the call!” He was working so I waited as long as I could (which wasn’t very long) before I popped my head in and asked him when he’d be off the phone. He knew something was going on because I’m pretty sure my smile was about to beam right off my face. I could not contain myself. He put the phone on mute and I blurted it out.

Now, this was NOT how I had thought this would go down. In my mind, when I pictured this special moment, I thought I would do something cute to tell him we’d been chosen or surprise him somehow in some adorable way like I’d seen on Pinterest. But, nope, it just spilled right out of me without any pomp or circumstance. “We’ve been chosen! AHHH!” Our baby was due tomorrow, so there was no time for cutesy stuff. This was happening. And it was happening now.

The caseworker sent us an email with some very limited information on the birthmother, and asked us if we would like to move forward. Our birthmother had called AdoptHelp only recently, so they didn’t have very much information or medical history on her, other than that she didn’t know if the baby was a boy or a girl and that she hadn’t had prenatal care during her pregnancy because she didn’t have a doctor. I won’t share anything else about her out of respect, other than that there was a photo of her attached and I immediately felt a connection to her. She had the kindest eyes and a beautiful smile. I could tell from the photo that she was a wonderful person. I was right (more on that later).

We knew nothing about the birthfather and a very limited amount of information about her. I had thought this would be important to me and that we would want/need to know as much as possible about the birthmother’s background. I worried for a second about the lack of prenatal care. But, honestly, none of that mattered to us–it just felt right in our hearts and we both knew that this was our child. This was our baby–he was about to be born… in Texas… and he needed us as much as we needed him. Of course we wanted to move forward with the match. Of course we did!

The next step was to have a phone call with the birthmother and then if we all still wanted to move forward, we would officially be matched… I’ll write about that first call–the first time we heard Miles’ birthmother’s voice–next time!

5 thoughts on “Our Adoption Story, Part I: The call”