This was the scene at our house right before our first call with Miles’ birthmother: It was Friday night around 8pm and I was frantically pacing circles around the house with the phone in my hand, taking deep breaths and trying very hard to calm myself down and talk my heart out of exploding. Jamie was sitting on the couch, with the other receiver in his hand–seeming much cooler. He was just as nervous as I was, I think, but was showing it much differently. We had her phone number and were told to call her at 7:30 pm. It was 7:28 and I was in a state of mild panic. Even the dogs could feel the nervous energy in the air.

What do we talk about? What do we say? What if she doesn’t like us or I say the wrong thing? Our caseworker had given us some basic advice via email: don’t get too personal or ask too many probing questions. Don’t bring up the birth father unless she does. Keep it light–this is just an introduction. Tell her how excited you are. Ask her why she chose you. Let her lead the conversation topics. Sounded simple enough, and I knew all of that intuitively, but it seemed like such an incredibly awkward thing. This woman was considering entrusting us with her baby’s life. What a difficult thing to do! I think my biggest concern was how to balance our excitement with her grief–I wanted her to know that we respected and cared about her and understood her feelings, too. I wanted her to know that we didn’t think this was all about us.

Finally, after gulping a huge breath of air, I dialed. And she answered. 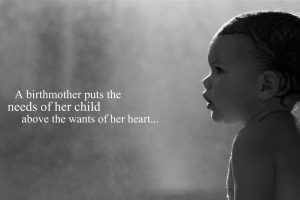 As soon as we actually heard her voice, we both felt much better. It suddenly wasn’t that awkward at all. We joked around a bit about how nervous we were–and she said she felt the same way. She was very sweet and began to tell us a little bit about herself. Her voice and the way she spoke made me feel the same way her photo did: this was a loving, caring, respectful woman who was making a difficult, selfless decision for the good of her child. She told us that she just couldn’t provide the life she wants for her child and that she thought we could.

She said she looked at our profile and knew right away we were the ones. She said, “I saw you guys and I didn’t even want to look at any others.” She said she loved that we were outdoorsy and that our child would grow up surrounded by nature, something she had not had as a kid, but wanted for the baby. She also loved that we said “cinnamon rolls!” would be part of our child’s life. (I thought that was funny–such a small thing but we love our cinnamon rolls around here and she said she thought all kids should grow up eating cinnamon rolls.) She also said she just loved the dogs, and that she thought they were so very cute and would make a child very happy. I think Gracie & Taylor played a big role in her decision, which is what we were hoping would happen–that someone would realize how amazing dogs are for kids–Miles already has two built-in best friends. So, really… our family photo, our love of nature and our dogs were the reasons she chose us. The things that pretty much sum us up, with some cinnamon rolls thrown in for good measure. It was perfect.

I don’t want to violate her privacy so I won’t share anything about her, but I felt a strong connection to her in that phone call. I related to her how much love we had to give, how cherished her child would be in our family, and that she, too, would always be a  loved, honored, and respected member of our family. I cried a few times as I told her how honored and grateful we were that she chose us and what a privilege it would be to raise her child… our child. I truly cared so very much about her already. It was hard for me to keep it together–it was so emotional. 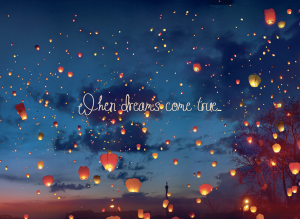 She told us that she had begun to have contractions and that while they weren’t too bad, they were getting stronger. She asked us if we could be there for the birth and that she wanted to wait until we were there to find out if the baby was a boy or a girl. She wanted us to be there for everything from there on out. We were so happy about that! She made me feel so reassured because she referred to the baby as ours and made it clear that her mind was made up. She was resolute about this adoption, and with her choice of us as parents. That was an amazing feeling. We weren’t really wondering whether or not it would happen–it was happening. This was really happening. And it felt so right.

We exchanged emails and said good night after we thanked her and I cried/blabbered a bit more. After the call, we each had to call our caseworker and tell her whether or not we wanted to move forward with the match. We got word at midnight that she wanted to move forward and that she thought we were “perfect.”  Needless to say, we didn’t sleep much that night, wondering when we should pack up and leave for Texas… on cloud nine the whole time.

to be continued… I hear a baby stirring…

One thought on “Our Adoption Story, Part II: First Call with Birthmother”

Outdoor homeschool. #silverlining
Been a fun week! Happy Holidays! 🎄
I do love a photo booth! Good times with great people.
Ho, ho, ho ❤️🖤
Happy birthday to this guy. So grateful for you, our love and our laughter. 💕
🐾 🎃

Outdoor homeschool. #silverlining
Been a fun week! Happy Holidays! 🎄
I do love a photo booth! Good times with great people.
Ho, ho, ho ❤️🖤
Happy birthday to this guy. So grateful for you, our love and our laughter. 💕
🐾 🎃
%d bloggers like this: