Some of you know that Jamie and I are relatively new to Charlottesville. We’ve been here for a little more than a year now, and are starting to settle in. Of all of the places we’ve moved to, Charlottesville has been the easiest place to make friends. People are so warm and welcoming here. I think the fact that it’s a small town helps. Everyone is just so nice. We have friends that we see on a fairly regular basis, we play on a co-ed softball team, and it feels like we’ve built a a nice little social circle.

Because our friends here are all so new, we hadn’t yet shared the news that we are adopting with them. Partly because, well, there really isn’t any news to share yet. And also because it feels like we’re still in the “first trimester” of our adoption, if that makes any sense. Actually bringing our baby home still feels very far away and it seems like only the people closest to us should know in case something goes terribly wrong.

But I felt comfortable enough to tell a couple of the girls recently and was so glad I did. They are really excited, and one of them offered right away to throw me a baby shower. She showed me the save the dates yesterday and they are so cute… 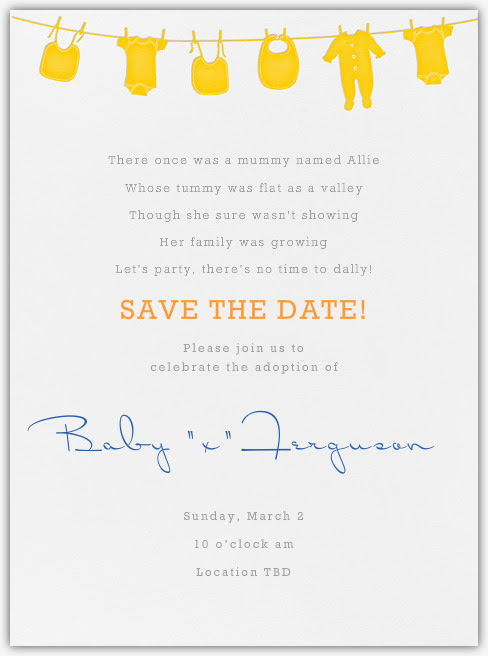 It really means a lot to me, especially because my best friends, who would normally throw a shower for me, live on the other side of the country so I didn’t think I’d actually have one. And since we are adopting and everything is so different from an actual pregnancy, I wasn’t sure if a shower made sense, when to do it, etc. But as soon as I told her, my new friend was all about it and starting planning right away. It’s really sweet and I’m so thankful to have met such wonderful people here in Charlottesville. And thankful that we have a network of new friends that will be there for Charlie, too.

There were many times when I wasn’t sure I’d ever have a baby, so the thought of having a baby shower is not something I ever allowed myself to think about. But now that I am having a baby–even though it isn’t happening in the usual way–I get to have a shower, too, just like any other mom-to-be. Because that’s what I am! Having a shower planned makes that feel very real. And that makes me smile.

6 thoughts on “A Baby Shower for Charlie!”