The morning after talking to our birthmother for the first time, we were debating when to leave for Texas. Her due date was the day before but she hadn’t received prenatal care so the date was really just a best guess. We wanted to be there for the birth but we didn’t want to be in Texas for a week or two prior to the birth because we knew we’d have to stay for a week or two afterwards.

We were so excited but a little unsure what to do. I got the feeling that it was going to happen soon, though, so we made a Target run to get a few things we needed to bring the baby home (blankets, somewhere to sleep, diapers, formula, etc.).

We had been planning to trade our 2-door SUV in for a 4-door when the baby came, and since we were now going to be taking a road trip of undetermined length (and had to bring the dogs) we needed to do that now, too.

When we got back from running these errands, I decided to call and check on our birthmother since she told us she had been having mild contractions. When we spoke she told me that the contractions had gotten worse and that she was heading to the hospital.

We no longer had to wonder when to leave. We packed up the new car, loaded the dogs and all our baby gear, and set off for Texas.

The road trip is kind of a blur to me now. We left at about noon on Saturday, and I was in contact with our birthmother for most of the drive. She was texting me from the hospital and her and I got to know each other more and express our mutual love for the baby. I think she was comforted by knowing more about me and how much I would love her baby. I was comforted knowing that she thought we were the perfect parents for her child and that she was doing this out of love. I will keep those messages between her and I and one day share them with 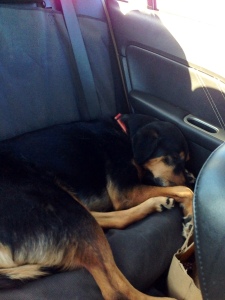 Miles so he can see just how much we both loved him before he was even born.

She really wanted us to be there for the birth. We thought we would be, and I was so excited about that. But the next thing I knew, the doctors scheduled her c-section for 7:30 pm central time. There was no way we could make it there by 7:30–we were still many hours away. We tried to find a flight for me at one of the airports we were driving by, so that I could at least be there and Jamie could drive with the dogs and arrive later. But there was no possible way for me to get to Texarkana that night. So we drove, and I worried. I was so anxious.

Our birthmother kept asking if we were there yet, and asking us to hurry. It was heartbreaking. I don’t think she wanted to give birth until we were there and it was killing me that we couldn’t get there in time. She wanted the baby to go from her arms directly to ours. All I could do was think about her and our baby and hope that someone was there for her and that she had some support. I knew from talking with her that this was not going to be easy for her. I told her we would be there as soon as we could.

And then they took her in for the c-section. Our baby was about to be born.

We didn’t hear anything for about an hour and a half, maybe two hours. That was a very difficult period of time–it was so hard not hearing anything. I knew she had just had major surgery and wasn’t sure when she would be able to get back in touch with me. But we were wondering if everything had gone okay and if the baby was healthy. I think I chewed off all of my fingernails, just hoping and praying that all was well. It was so hard not to be there. I remember just thinking about our baby, at the moment he or she was being born and sending so much love his or her way. The sun set as we waited to hear and it was incredibly beautiful. I took that as a good sign.

And then finally, we heard from her. She told us that she was fine and the baby–a beautiful baby boy(!)–was perfectly healthy. 6 pounds, 14 ounces. 20 inches long.

A boy. A boy. A boy. I would have loved and adored a daughter, of course, but I have always wanted a son. Jamie and I were both secretly hoping for a boy and when she told us I started crying immediately. What a miracle. What a gift. I can’t even express how happy and filled with joy I was at this moment. The little boy who was just born in Texarakana, Texas, belonged with us and everything about it felt right. We hadn’t yet laid eyes on him, but he was already a Ferguson. My heart was soaring.

We still had several hours of driving ahead of us at this point, but neither of us could sleep. When we were about two hours out–at 2 a.m.–Jamie was looking frazzled so I told him to get some sleep and I would drive us the rest of the way. I was totally wired, running on adrenaline and caffeine, and couldn’t have slept if you paid me. I felt amazing, like I was driving on air.

And then something very special happened. As we neared the hospital in Texarkana, around 4:30 a.m. or so, John Fogerty came on satellite radio singing “Never-ending Song of Love.”

A more appropriate song has never been played.

6 thoughts on “Our Adoption Story III: The Journey”